On the morning of February 19, 2018, day turned to night for the residents of Perbaji, a small village less than five kilometers away from Mount Sinabung in Karo Regency, North Sumatra. Oktavianus Karo-Karo, 28, was sitting in his wooden house in the shadow of the active volcano when he heard an ominous rumble. When he looked outside, the sky had turned black as the volcano shot ash over 5,000 meters in the air.

“It was so dark I could barely see a meter in front of me,” Karo-Karo told The Diplomat. “I was trapped in my home for over two hours with my family until the ash cleared.”

In addition to the ash cloud, pyroclastic flows cascaded down Mount Sinabung’s slopes and a huge section of the peak was “completely annihilated,” according to Indonesia’s Center for Volcanology and Geological Hazard Mitigation. The center estimated that 1.6 million cubic meters of the lava dome had been blown off in the blast. The spokesperson for the Indonesian Disaster Mitigation Agency (BNPB), Sutopo Purwo Nugroho, said on Twitter that it was the largest eruption since 2014.

When Karo-Karo, who is a volunteer liaison officer between the government and local villagers, finally ventured outside, he saw that the banana trees around Perbaji had been toppled by the falling ash and their leaves scorched by the heat. The main bridge that leads into the village had been decimated by hundreds of rocks, carried along by mud that poured down from the mountain. On the day The Diplomat visited, many of the villagers were sitting on piles of rubble and watching as a digger worked to clear the debris. The plan was to build a new bridge from trees that had been cut down from the surrounding jungle. 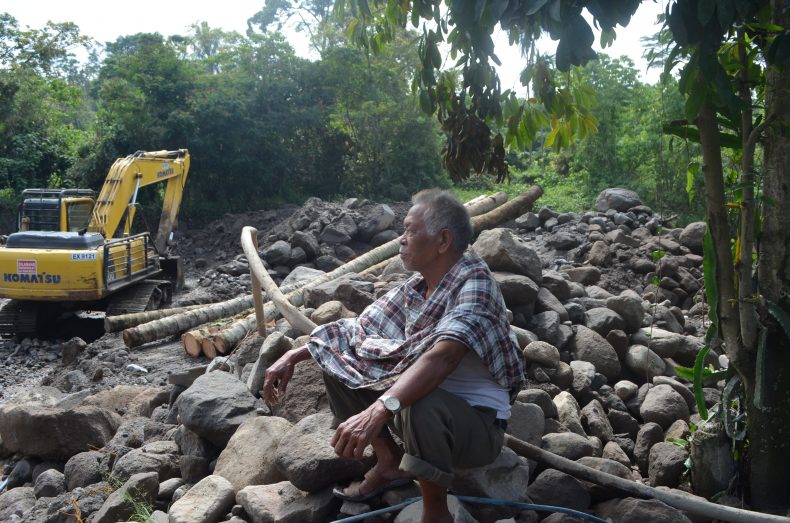 A villager in Perbaji sits on rocks thrown down the mountain during the last eruption. Photo by Teguh Harahap.

Mount Sinabung is an active volcano that had been dormant for centuries before it came back to life in 2010. It has been erupting on and off ever since. In 2014, 16 people were killed when the mountain erupted and in 2016 a further seven people died when they were caught up in a pyroclastic flow. Over 7,000 people have been affected by the eruptions and several hundred are still in temporary shelters – some since 2014. Many will never be able to return to their homes.

Indonesia is no stranger to natural disasters. It sits on the Ring of Fire, an area in the basin of the Pacific Ocean known for its volcanic belts and plate movements. There are around 130 active volcanoes in Indonesia and the country is regularly battered by storms, landslides, earthquakes, and extreme weather patterns. In 2004, Aceh province was hit by a tsunami caused by an earthquake and in 2017 Mount Agung in Bali erupted, causing thousands of villagers to flee their homes. Most natural disasters however, while often devastating in their impact, happen suddenly and incidents are usually isolated. They can be managed after the event and often don’t occur again in exactly the same place for years – if at all.

Mount Sinabung is different. It’s the volcano that won’t stop erupting, and is shaping up to be one of the longest running ongoing natural disasters in Indonesia. 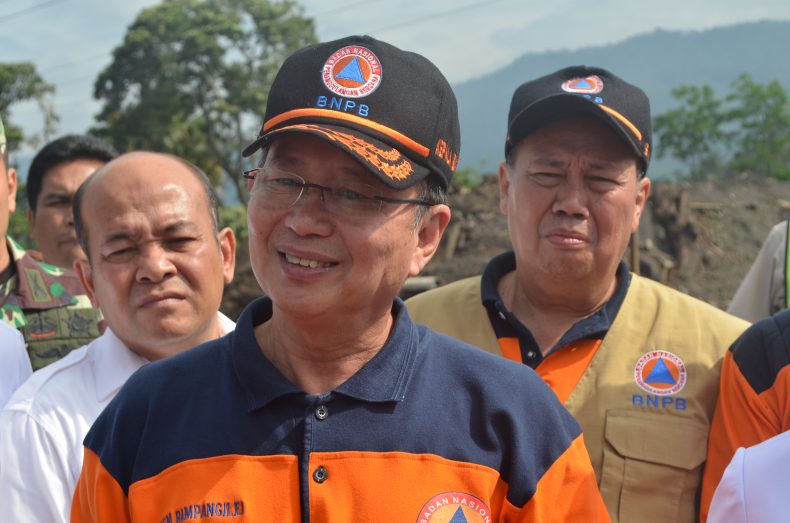 This presents a dilemma for BNPB, who are now trying to deal with the logistics of Mount Sinabung’s frequent eruptions, which show no sign of abating. On February 28, the head of BNPB, Willem Rampangilei, traveled to Karo Regency from Jakarta to meet with evacuees and discuss teething problems with some of the measures that are being put in place to manage Mount Sinabung’s impact. When The Diplomat met with Rampangilei, he was inspecting a mud-covered site pockmarked by a few concrete pathways, which will be used as lava diversion channels. Speaking to The Diplomat, he explained some of the issues that BNPB are facing.

“There are some problems with the mission such as bottlenecks caused by the lava diversion channels. The workers have asked for light towers to work on these at night to get them completed quickly. We also need to check the early warning systems that tell the villagers about an eruption,” he said.

Rampangilei also addressed one of the most difficult aspects of Mount Sinabung’s frequent eruptions. Many of the villages in the area are too close to the volcano and it’s not safe for residents to keep living there. After the most recent eruption, 10 more villages are going to be relocated as they lie inside the designated “Red Zone.” Before the latest eruption, this zone was set at a 5 kilometer perimeter around the volcano, but has now been increased to seven kilometers. Rampangilei explained that BNPB are working as quickly as possible to deal with this.

“We have a special order from the president [Joko Widodo] that all the new homes and other measures must be completed by the end of this year,” he said. 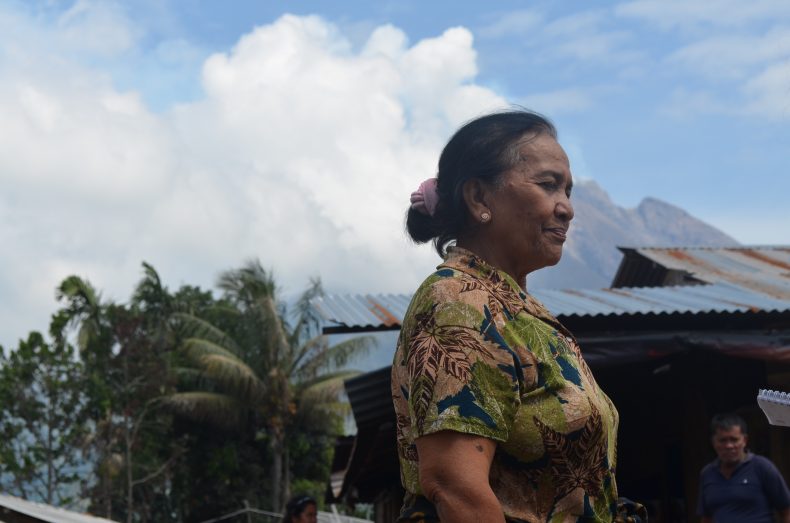 Panalemen Karo stands in her village of Guru Kinayan in front of smoldering Mount Sinabung. Photo by Teguh Harahap.

But while some villagers have been moved to new housing and others are waiting for homes to be completed, there remains another problem. Panalemen Karo, 66, lives in Guru Kinayan, around 7 kilometers away from the mountain, and also sought shelter in her home when the towering ash cloud started to fill the air. Karo has been told that she will be provided with new housing, but is reluctant to leave Guru Kinayan for the safety of a home further away. The reason: her coffee plantation.

“In Karo Regency we eat because of our coffee,” she said simply.

She means that coffee is one of the main sources of income in the region, as it grows easily at the higher altitude and in the fertile volcanic soil around Mount Sinabung.

“I can’t leave my coffee so I will use the new home as a place to run to when there is an eruption. When it’s over I will come back to my house here,” she explained.

And for many villagers, this is the real dilemma that Mount Sinabung’s rumblings cause them. While they may be able to leave their homes in places like Guru Kinayan and relocate a safe distance away from the mountain, the government will never be able to move the coffee plantations that villagers rely on to feed their families. It isn’t just about their personal safety, but also their plantations and their livelihoods. 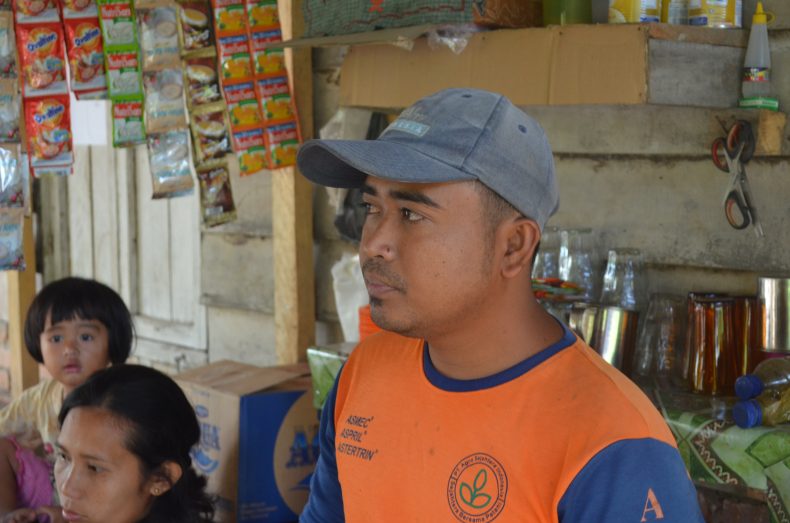 Oktavianus Karo-Karo was trapped in his home in Perbaji with his family for two hours after the eruption. Photo by Teguh Harahap.

Some residents also feel that they could live safely next to Mount Sinabung if the right measures were put in place. Karo-Karo said that many villagers in Perbaji don’t agree with the government’s plans to build lava diversion channels and think they were “not effective” as they are being built in the wrong place. According to Karo-Karo, the ones planned around Perbaji could actually cause flooding when it rains, making the situation even worse – the “bottlenecks” mentioned by Rampangilei when he inspected the lava diversion channel site.

Karo-Karo thinks that local residents are best placed to advise the government on how the lava diversion channels and evacuation points should be positioned.

“I can read the mountain and I know from the previous eruption patterns where the lava will flow out of Mount Sinabung,” he said.

Visits by officials like Rampangilei make him hopeful that talks between BNPB and local residents will increase. Then perhaps a compromise can be found that will allow people to stay in their villages in a safe way. 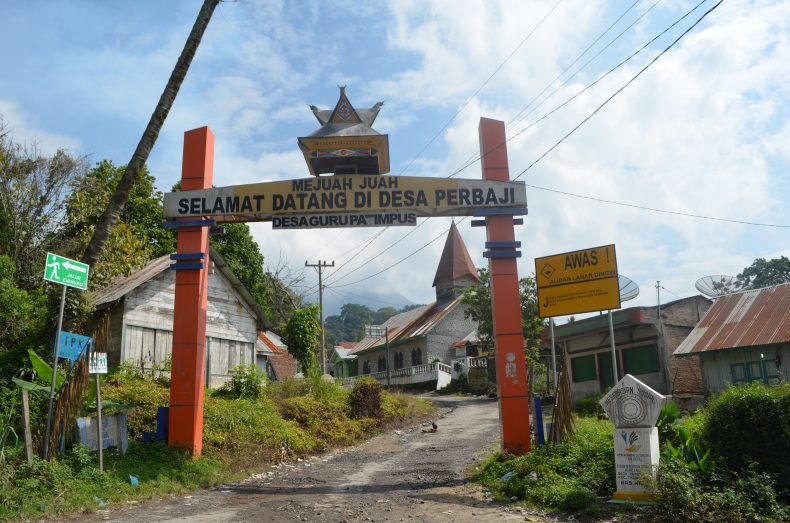 Perbaji Village is around 5 kilometers away from Mount Sinabung and villagers fear they may have to leave their homes due to the constant eruptions. Photo by Teguh Harahap.

And Karo-Karo is adamant he wants to stay in Perbaji. He has a 1-year-old daughter named Kristin, but when asked if he has ever considered moving his family to a safer location, he shook his head emphatically,

“We know it’s dangerous to stay. But we love our village so we can’t leave,” he said.

Aisyah Llewellyn is a British freelance writer based in Medan, Indonesia. She is a former diplomat and writes primarily about Indonesian politics, culture, travel and food.

By Firman Taufiq and Edna Tarigan

A magnitude 5.6 quake shook Cianjur in West Java province in the late afternoon.

Indonesia’s rainforests are being torn down at an alarming rate. Ulara Nakagawa reports on the pressures locals face from the palm oil industry.

They Survived A Devastating Earthquake. Now The Real Challenges Begin.

Indonesia's recent earthquake has faded from the headlines, but the challenges of reconstruction might last for years.