China’s increasing pressure over the suspended Myitsone dam in ethnic Kachin state has highlighted Myanmar’s dilemma in choosing between environmental protection and safeguarding the great Irrawaddy River, and its political and economic dependence on Beijing.

The $3.6 billion dam, ranked as one of the biggest hydropower projects in the region, was suspended by former President Thein Sein in 2011, causing shock and consternation to Beijing’s State Power Investment Corporation (SPIC), the main investor in the controversial dam.

It is a relatively rare event for a massive Chinese overseas dam project to be blocked by a popular protest. The world’s number one dam builder, China, by one count, has a portfolio of 334 hydropower projects in 74 countries, and only a few have been suspended or cancelled as a result of public opposition. In Myanmar, the protests united all ethnic groups living along the river and nationwide.

Pitted against the wounded ego of Beijing and the anger of Chinese hydropower investors are very high stakes on Myanmar’s side of the fence: national pride, self-determination, and the protection of its richly diverse ecosystem.

This dam, if ever built, would inundate the ancestral birthplace of the ethnic Kachin people. Khon Ja, the coordinator of the Kachin Peace Network, told The Diplomat that “the dam would erode the lifeblood of the nation that sustains agriculture, fisheries, and livelihoods for millions.”

Anti-dam leaders, both Kachin and Burmese, wonder what would remain of Myanmar’s claim to independence and sovereignty over its natural resources if the flow and fate of their most important river were to be consigned into the domineering hands of the rising dragon perched along on the nation’s northeast frontier. The consequences, according to the archbishop of Yangon, Cardinal Maung Bo, would be so disastrous that “it would be a death sentence for the people of Myanmar.”

Most Chinese academics see things in a very different context. Fan Hongwei, an expert on Myanmar at Xiamen University, told the Global Times, “The abrupt suspension of such a significant project has blurred political trust between China and Myanmar.”

“Whether the issue could be addressed properly concerns the Myanmar government’s credibility and its capability to provide a sound environment for foreign investors amid challenges” said Fan, without addressing the flood of criticism and concerns that triggered the dam’s suspension.

Not so long ago, most observers in Myanmar had concluded that one of the world’s most hated dam projects had little or no chance of ever getting the green light, in spite of China’s far-reaching influence as a major investor and trading partner, not to mention playing an increasingly assertive role in the country’s peace talks with armed ethnic groups.

Without or without this dam, China is sure to remain the biggest foreign investor in Myanmar, with more than $15 billion of direct investment in 126 business projects in 2018.

China has also reaped diplomatic gains by becoming Myanmar’s most dependable ally inside the UN Security Council, as a result of disaffection from Western governments over human rights concerns and the Rohingya issue.

Still, many observers had believed that the strategic environmental assessment (SEA) commissioned by the Myanmar government to study hydropower impacts on Myanmar’s rivers would be the clinching factor in persuading the National League for Democracy (NLD) government to finally cancel the dam.

The release of the SEA report in 2018, with its final draft presented by the International Finance Corporation, a financial arm of the World Bank, strongly recommends against building the Myitsone Dam and all other hydropower projects on the mainstream of Myanmar’s five major rivers.

This scientific overview carried out by independent scientists warned that “if constructed, Myitsone dam would break river connectivity, trap sediment, and alter the river flow on a wide scale. The plan for five large dams on the main stems of Ayeyarwady (Irrawaddy) and Thanlwin (Salween) rivers would completely alter the river system’s hydrologic, sediment transport, and geomorphic functioning.”

The research was conducted by ICEM, an Australian environmental assessment group, and approved by the government’s Ministry of Natural Resources and Environmental Conservation as well as the Ministry of Electricity and Energy (MOEE).

But Aung San Suu Kyi, the NLD leader and state counsellor, still did not break her long silence. She has also refused to make public the report of the 20-member commission, led by Speaker of the Parliament U T Khun Myat, on the all dam projects on the Irrawaddy River, which submitted its final report to the President’s Office in November last year.

Far less conspicuous than China’s leverage over Myanmar in other sectors is its growing influence of its hydropower advisers inside the MOEE.

U Win Khaing, the energy minister, mentioned last year that the ministry was quietly working on a new hydropower policy and preparing a white paper, but gave no details. The ministry has long had close links with China’s National Energy Administration and the China Renewable Energy Engineering Institute — a think tank under the NEA, now working with closely with the MOEEon the white paper.

It can hardly be a coincidence that the same ministry that had once approved the SEA environmental report and accepted the conclusion “that no dams should be built on the five major rivers of Myanmar” has since mysteriously removed its logo of endorsement from the front page of the final SEA publication.

It is reported that Chinese hydropower is fervently opposed to the SEA’s conclusions. The Chinese advisory group’s contribution to the MOEE white paper will almost certainly dilute or delete key SEA recommendations that would stand in the way of their billion-dollar investment plans for damming not only the Irrawaddy and but also the Salween River.

Joerg Kristensen, executive director of the Myanmar Institute for Integrated Development, commented that the new white paper must be working to undermine the SEA, “otherwise they could go with the SEA, which is a very solid paper, and not against hydropower.”

Many fear that if China finally gives up on the Myitsone, it will harness the future MOEE white paper on hydropower to press all the harder on dams on other mainstream rivers, especially the equally controversial Mong Ton dam on the Salween, the last undammed river among major waterways in Asia. 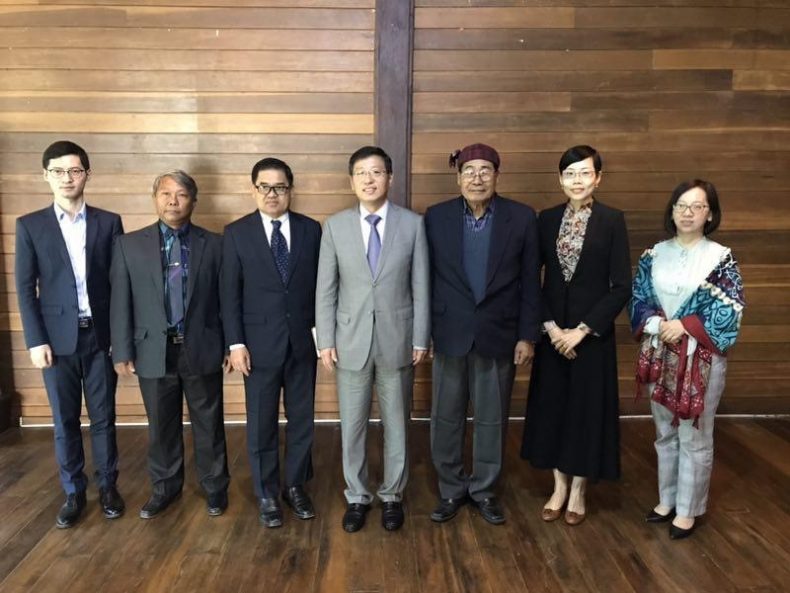 The Chinese ambassador meets with ethnic Kachin leaders in December 2018. Image from Facebook.

Another attempt at lobbying to restart the Myitsone was carried out by Chinese Ambassador Hong Liang in his visit last December to Myitkyina, the Kachin state capital.

The ambassador ‘s mission to pressure ethnic Kachin leaders to come around to the Chinese way of thinking about supporting the Myitsone dam was met with a firm rejection. But a completely opposite spin appeared on the Chinese embassy website a few days later, which claimed that “Kachin political leaders and social organisations had a ‘positive attitude’ towards the 6000-megawatt Myitsone Dam. Local people of Kachin State do not oppose the Myitsone hydropower project.”

Strong denials were issued by several Kachin leaders who had met with the ambassador, including Reverend Hkalam Samson, chair of the Kachin Baptist Convention.

Khon Ja, coordinator of the Kachin Peace Network, told The Diplomat that this was a campaign to sow discord and confusion. “The Chinese Embassy has reported the opposite of what was said by those leaders who have publicly opposed the project,” she said. “This is dangerous. I think it is worse than a divide-and-rule approach.”

There is little doubt that if a referendum were to be held, the dam would be overwhelmingly rejected. Two experts on Myanmar, Julian Kirchherr and Mathew Walton, co-authored an op-ed on the Myitsone dam in which they concluded, “We cannot think of a single infrastructure project worldwide which faces a more sweeping opposition.” They cited a Yangon School of Political Science (YSPS) poll that an estimated 85 percent of people in Myanmar opposed the Myitsone dam in 2017.

In spite of the huge weight of public opinion against the dam, cancellation and a costly compensation deal of several hundred million dollars is not the most likely outcome.

U Thaung Tun, minister of investment and foreign economic relations, who has conceded the deep unpopularity of the project, recently told an investment conference that “Negotiations are underway to change the size, scale, or location of the Myitsone dam project in Kachin state.”

However, sources inside the NLD admit that if they concede too much ground to China, then the Myitsone dam dilemma could inflict serious damage on their credibility with voters and any chance of a convincing victory in the 2020 election. That’s one more reason among many for Myanmar leaders’ long silence on the dam, which keeps the nation guessing.

Ironically, even without this troublesome dam, China has a string of projects lined up in Myanmar, put forward within the framework of the China-Myanmar Economic Corridor agreement and all part of China’s Belt and Road Initiative.

In reality, the Myitsone dam is not such a big issue for China, in the view of Myanmar analyst Tom Kramer, Yangon coordinator for the Trans-National Institute based in Amsterdam. Kramer told The Diplomat that “for Chinese interests, Myitsone is a ‘win-win’ because it might get built, there might be compensation, there might be an alternative project, or it might advance Chinese geopolitical interests.

“In terms of China-Myanmar relations. there are so many other more urgent and central issues to inter-development between the two countries.”

Tom Fawthrop is a freelance journalist and film-maker based in Southeast Asia.

China is preserving the ecology of the Nu River within its borders. Downstream in Myanmar, it's a different story.

Has the US Lost Myanmar to China?

Who the newly appointed prime minister chooses could determine the fate of his sprawling unity government.

Dawn of the Drone Age in Central Asia

Central Asian countries have been stepping up their drone capabilities.

The murder of Shraddha Walkar shone a spotlight on the pervasive issue of domestic violence.

Doing what is “right” on a wide range of issues has reinforced the momentum in U.S. efforts to counter Beijing.

‘Don’t Say Gay’ Is Happening in China Too. But It Can’t Turn Back the Clock.

Despite the many differences between the United States and China, anti-LGBTQ rhetoric in each follows a similar logic.

After a decade of continuous investment, China is now poised to take on global leadership of the IEV industry.

From manned submarines to underwater drones, China’s stepped-up deployments in the region are concerning to India.

The State Department added four leaders of TTP and al-Qaida in the Indian Subcontinent to its list of "Specially Designated Global Terrorists."