On Tuesday, October 1, thousands of pounds of military hardware rolled down Beijing’s Chang’an Avenue and through Tiananmen Square, as top officials of the Chinese Communist Party inspected them. Chairman Xi Jinping, the commander-in-chief of the People’s Liberation Army, presided over the event, which marked a celebration of the 70th anniversary of the founding of the People’s Republic of China in 1949.

Tuesday’s parade was a major demonstration not only of national pride and military modernization, but a moment to underscore the loyalty of the People’s Liberation Army to Xi and the Party. Like the summer 2017 parade at the PLA’s Zhurihe Training Base, Xi was driven down the assembled line of parade units, carrying out a total inspection. When PLA honor guards presented the flags at the initiation of the event, the Party’s flag preceded the PRC’s national flag, followed by the PLA’s flag. This was a celebration of nationalism, modernization, and resolve.

The parade marked a major “coming-out” moment for several important bits of PLA kit. It marked the most important parade for Chinese nuclear forces in some time, with the introduction of the DF-41 intercontinental-range ballistic missile and the JL-2 second-generation submarine-launched ballistic missile. 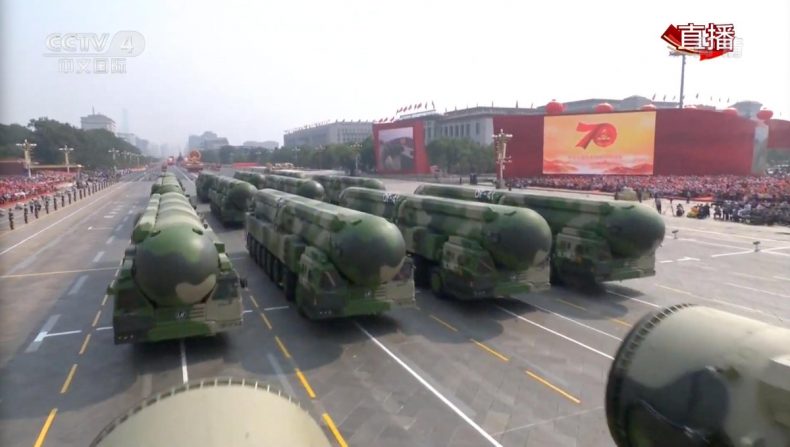 In qualitative terms, China also introduced the world to the the DF-17 hypersonic glide vehicle-carrying ballistic missile, whose existence had first been revealed by The Diplomat two years ago. The DF-17 is expected to see service soon with the People’s Liberation Army Rocket Force.

Beyond these systems, the parade introduced several advanced unmanned systems, including the WZ-8 supersonic reconnaissance unmanned aerial vehicle (UAV, similar to the American D-21), the GJ-11 stealth UAV, and the HSU001 large-displacement unmanned underwater vehicle (LDUUV). Beijing also showcased the DF-100 long-range anti-ship missile, the DF-31AG road-mobile, single-warhead ICBM, and the DF-26 conventional and nuclear-capable intermediate-range ballistic missiles. The DF-21 family of missiles did not make an appearance at this parade. 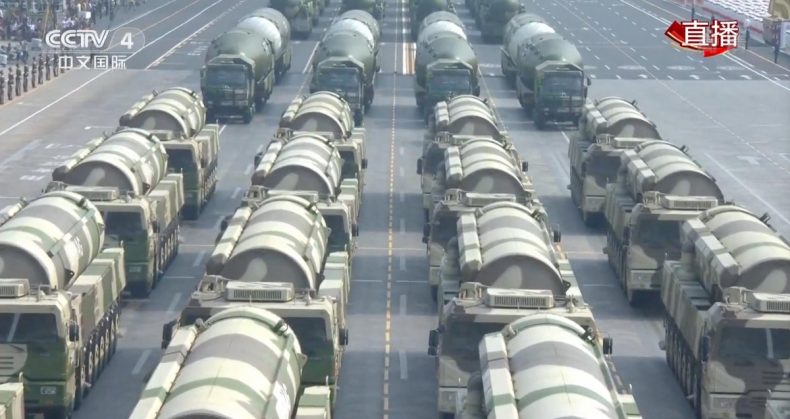 The crescendo of the military parade — the final item to be shown — was the DF-41 ICBM. This is a solid-fuel, road-mobile ICBM, capable of carrying multiple independently targetable reentry vehicles (MIRVs). Sixteen launchers from two PLARF brigades participated in the parade. The DF-41 is expected to become the cornerstone of China’s strategic deterrence, bringing flexibility, responsiveness, and increased survivability to China’s ability to assuredly retaliate to any nuclear attack. 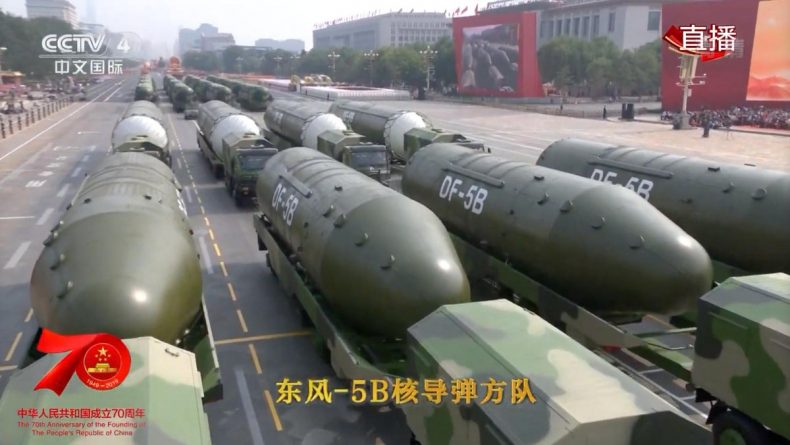 The DF-41 was preceded in the parade by its spiritual predecessor, the DF-5B, a MIRV-capable, stationary, silo-based, liquid-propellant ICBM. While the DF-5 family remains physically the largest Chinese ballistic missile, Beijing is expected to begin favoring the road-mobile DF-41 given the tremendous survivability advantages.

In recent years, China’s nuclear force development has been driven by survivability concerns, both left and right of launch. Given its continued reliance on a no first-use posture, whereby missiles land-based missiles and warheads are stored separately in peacetime, China seeks high assurances that its nuclear weapons will remain impervious to destruction in precision conventional strikes by its adversaries (mainly the United States) and that, after nuclear escalation, they can be used to retaliate successfully and penetrate missile defenses. 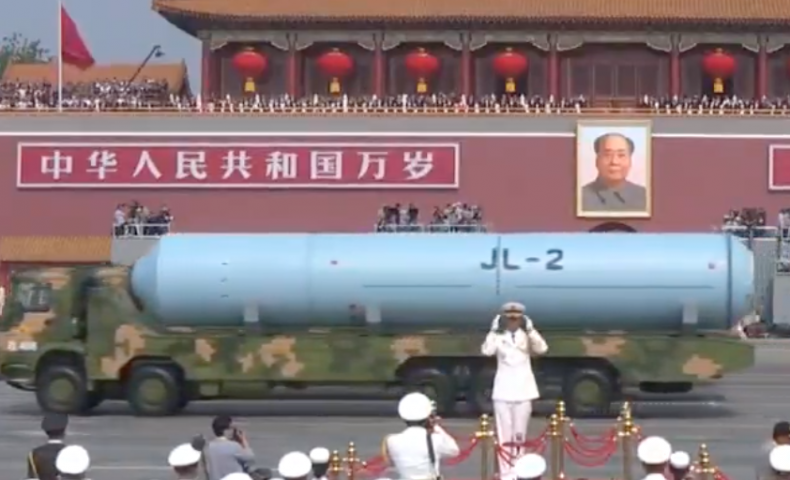 The JL-2, which has been in service for years with the PLAN’s Type 094 ballistic missile submarines, made an appearance at this parade to serve as a reminder that China’s strategic nuclear deterrent extends to the sea now. The JL-2, with its limited range, is an imperfect system, however. Beijing has started testing of the JL-3, as the The Diplomat first reported last year. The JL-3 will be China’s third-generation SLBM, with a longer range.

Much global scrutiny and attention after this latest parade will zero in on the DF-17. Globally, there’s a bit of a surge in interest in “hypersonic” weapons. The DF-17 represents a particular type of hypersonic weapon — the kind that most people mean when they use the word. Instead of a normal ballistic reentry vehicle or even a maneuverable reentry vehicle, the DF-17 uses a boost-glide vehicle. The booster — the lower part of the DF-17 that appears to be based off the DF-16 — propels the payload to outside the earth’s atmosphere. From there, the glider separates and begins to return to earth, accelerated by gravitational forces, just like a normal reentry vehicle. 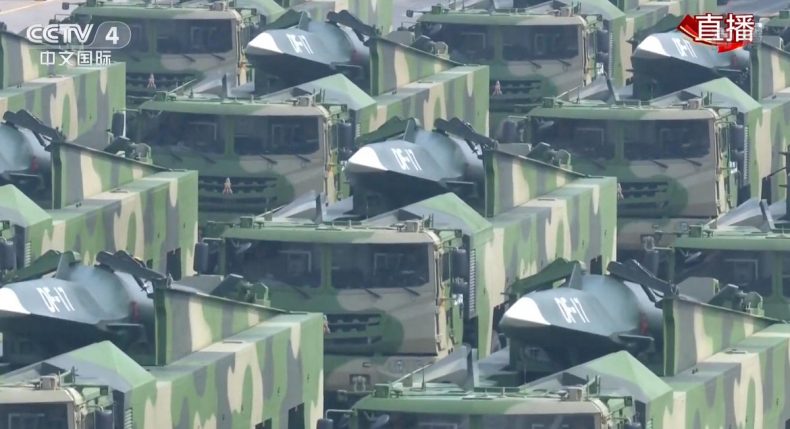 Where the fate of the hypersonic glider diverges from that of a reentry vehicle is in what it does after it begins to experience atmospheric drag. The glider leverages lift and drag forces to begin a gliding flight trajectory — imagine a pebble skipping on top of the surface of a pond. In doing so, it exchanges velocity for range, while generating tremendous amount of heat. The physics of these types of vehicles have been understood for decades, but advances in materials science in recent years have made them a military practicality.

Weapons like the DF-17 will introduce new challenges for China’s adversaries, including the United States (for a longer discussion of the general consequences of hypersonic boost-glide vehicles on strategic stability, see here). At the parade, we learned, based on what the announcer said, that the DF-17, as it is inducted into service, will have a conventional payload delivery mission and not a dual conventional and nuclear role, like the DF-26, for instance.

That, however, doesn’t match with the most recent U.S. military intelligence assessment of the weapon, which indicated that the DF-17 would be nuclear-capable. (Nuclear-capability might be leveraged in the future, if conditions change, for instance.) I’ll follow this article with a deeper dive into the DF-17 and its consequences. 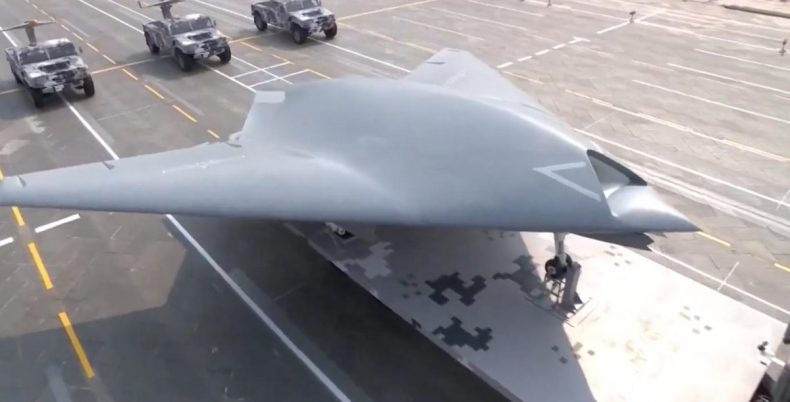 Beyond the missiles, the suite of autonomous systems — the supersonic UAV, stealth UAV, and the LDUUV, in particular — were notable. Each of these systems is designed for a different role on the modern battlefield. The WZ-8, for instance, appears designed to serve as an air-launched capability to gather intelligence and conduct damage assessments during conflicts (in addition to other possible roles). The GJ-11 (or Sharp Sword) may soon be a carrier-borne capability to allow the PLAN access to air defense-dense environments in the Western Pacific. The Sharp Sword likely has limited internal bomb bays, but enough to serve as a stealthy unmanned strike platform.

The HSU001 LDUUV represents one the most interesting appearances at the parade. Its existence is unsurprising given longstanding rumors about Chinese interest in similar systems. What is unclear is the exact role it might play in the PLAN’s strategy. The parade units appeared to have protruding sensor and a probably nose sonar, which would be useful if these UUVs would conduct long-endurance missions to ensure that enemy submarines remained far from the PLAN’s ballistic missile submarines, for instance.

One final observation I’d offer on the parade is the overall prominence afforded to the PLA’s Strategic Support Force — a unit borne of the 2015 top-down reform of the Chinese military. The SSF’s missions encompass electronic warfare, cyber warfare, and space warfare. The parade featured SSF units marching alongside the other branches of the PLA. Additionally, several electronic warfare systems, early warning radars, and satellite communications systems were included in the parade. The SSF’s role at the center of a newly modernized PLA, brimming with emerging technologies, was unquestionable.

I’ll wrap up these initial observations here. I expect to expand on the parade with thoughts on many of these systems — certainly the DF-17 — in a follow-up analysis here at The Diplomat.

China’s October 1 Military Parade: What to Look For

China’s conventional and nuclear modernization is about to be put on display.

An in-depth look at the Chinese People's Liberation Army parade on October 1.