In October 2020, a Pew Research Center survey found that a median of 61 percent of citizens in 14 major economies hold unfavorable views of China. In countries such as the United States and Canada, negative views have reached historic highs. Major news outlets around the world picked up the story, with headlines such as “Distrust of China Jumps to New Highs in Democratic Nations,” “China Shocked to Discover the Developed World Views It in a Negative Light,” “China Has a Global Image Problem,” and “World Turns Sour on China.” The survey has generated much attention because China’s image abroad affects the extent to which China can play a leadership role in world affairs as it continues to rise. Some went as far as saying that “even if China could lead the world one day, it would never be loved.”

We investigated the other half of the story: How do ordinary Chinese view the rest of the world? Is a similar plunge in public opinion occurring in China toward the United States and its traditional allies? The Chinese public’s views of these countries matter to their perception of other countries’ intentions toward China, and their willingness to support engagement with these countries bilaterally and multilaterally.

With these questions in mind, we conducted a survey of 1,064 Chinese adults right before the U.S. presidential election. We asked them about their feelings toward the same 14 countries covered by the Pew study, using exactly the same wording: “What’s your view of the following countries?”

We found that the negative feelings are mutual. In particular, Chinese and Americans dislike each other to the same extent. In the Pew study, 73 percent of Americans held either “very unfavorable” or “somewhat unfavorable” views of China. On the Chinese side, the antipathy is even more widespread: 77 percent of the Chinese hold such views of the United States.

Particularly surprising is the large increase from a previously known level of negativity toward the United States. Much is made of the result from the Pew study that negative views of China in the United States have jumped nearly 20 percentage points since President Donald Trump took office, rising 13 points since just last year. Yet this pales in comparison to the deterioration in Chinese views of the U.S. When the Eurasia Group Foundation polled Chinese opinions about the United States in October 2019, only 17 percent reported having unfavorable views. Then, in just twelve months, this number more than quadrupled.

So what has happened since last October? In a nutshell, all news about the U.S.–China relationship has been bad. Beginning with the trade war, the Huawei ban, and diplomatic rows over the Hong Kong protests, continuing with a significant escalation of animosity stemming from criticisms of each other’s handling of COVID-19 pandemic, and culminating in mutual closures of consulates — everything points to a rapid descent into a level of confrontation unprecedented since the two countries established formal ties in 1979. 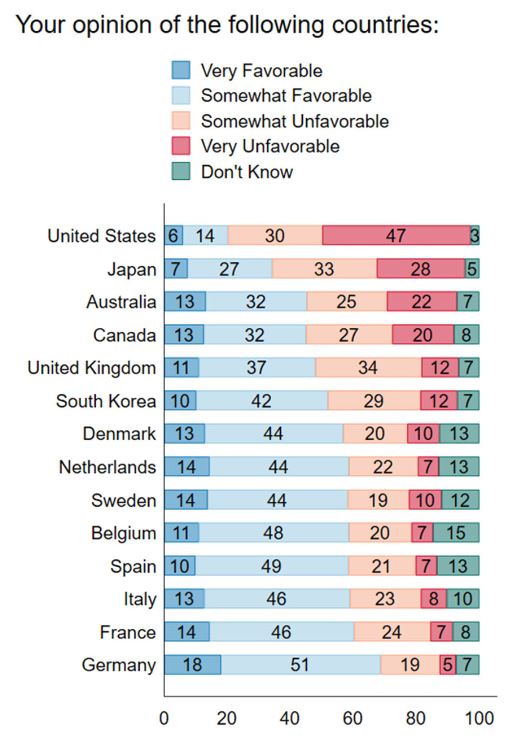 Close U.S. allies also received significantly unfavorable views, though the percentages were generally lower than the corresponding negative views of China reported in the Pew survey.  Japan is the second most disliked among the 14 countries listed, with 61 percent of the respondents holding either “very unfavorable” or “somewhat unfavorable” views of that country. Moreover, Japan was the only country other than the U.S. to receive more negative views than positive views from Chinese respondents. The result is not terribly surprising. Relations have at best been lukewarm between China and Japan, with unresolved historical issues surrounding the Japanese invasion of China, and an ongoing territorial dispute over the Senkaku/Diaoyu islands. In addition, Abe Shinzo’s government was seen as actively seeking U.S. support to counter China’s rise in Asia. However, while only 9 percent of Japanese respondents viewed China favorably in the Pew study, 37 percent of Chinese viewed Japan somewhat or very favorably.

The other three major U.S. allies — Australia, Canada, and the U.K. — received the next three highest percentages of negative views, with 47 percent of Chinese respondents holding “very unfavorable” or “somewhat unfavorable” views of both Australia and Canada, and 46 percent feeling that way about the U.K. Australia, which pre-empted even the United States in banning Huawei from its 5G network, has warned against alleged Chinese attempts to influence its domestic politics, and, much to Beijing’s chagrin, has called for a global investigation into the origins of COVID-19. China’s feud with Canada began last year with the arrest of Huawei’s CFO, Meng Wanzhou, at the request of the U.S., and the subsequent developments and associated analysis have dominated the coverage of Canada in the Chinese media. Prior to the episode, Canada was most known in China for being the home country of Norman Bethune, a beloved Canadian doctor who died of infection during the Chinese Civil War while saving lives on the frontline. As for the U.K., its strong and continuing criticism of China’s handling of last year’s Hong Kong protest movement has certainly caught the attention of the Chinese public. Still, more people in China hold favorable than unfavorable views of these three countries.

Continental European countries fared better with the Chinese public than the U.S. and its close allies, despite many of these countries having criticized Beijing’s foreign policies and domestic human rights practices. The majority of Chinese have either very favorable or somewhat favorable views on Belgium, Denmark, France, Germany, Italy, the Netherlands, Spain, and Sweden, with Germany enjoying the highest combined positive rating of 69 percent.

A number of factors may explain the warmer feelings. First, several of these countries do not get much coverage on Chinese media, evidenced by the larger than average proportion of “don’t know” answers in the survey. When they do appear in the news, the stories tend to be positive and associated with constructive governmental relations — for example, Italians thanking China for sending an expert team to help fight COVID-19. Second, the Chinese government often puts it in its official media that China and Europe don’t have “fundamental conflicts of interest,” a narrative that might have some purchase among the Chinese public. Third, in the last four years, the EU has not been in lockstep with the U.S. on its China policy, which has been noted by Beijing and widely reported. In fact, with Trump initiating trade conflicts with both China and Europe, the Chinese may feel they are together with Europeans in facing economic uncertainty.

To sum up, while a negative perception of China is dominant in major economies, Chinese people’s views on these same countries are more varied. The negative feelings are mutual between the two largest economies in the world, where the recent plummeting of goodwill has been rapid. Chinese feelings about the United States’ close allies have also soured, though negative views are largely balanced by positive views. Continental European countries fare the best in the eyes of the Chinese people. It is possible that current negativity about Europe is only ephemeral and will soften by the time the pandemic ends, and Chinese people start to travel again, as these same countries are often their favorite destinations. However, the world should be concerned about the mutual antipathy Chinese and the Americans hold toward the other’s country likely outliving the pandemic, and even hardening as geopolitical rivalries persist and deepen.

The Trump administration attempted to draw a distinction between the Chinese Communist Party and the Chinese people, and made clear that the United States is confronting the former. However, our findings suggest that the distinction in all likelihood is lost in the eyes of the Chinese public, who hold just as much antipathy toward the United States as Americans do toward China. It’s unclear this will change after President-elect Joe Biden is sworn into office. As long as the strategic rivalry continues, mutual negative perceptions are likely to prevail and overshadow what will be the most important bilateral relationship in the world for years to come. Because support from domestic public is more important for the leader on each side than how the country is perceived internationally, an unintended crisis could escalate into military conflict, with both leaders finding it difficult to back down in front of their domestic audiences.

Adam Y. Liu is an assistant professor at the Lee Kuan Yew School of Public Policy, National University of Singapore.

Xiaojun Li is associate professor of political science at the University of British Columbia and non-resident scholar at the 21st Century China Centre at UC San Diego School of Global Policy and Strategy.

“Medieval Indian kings understood the benefits of what we would call openness and tolerance.”

How Did Chinese People React to Trump’s COVID-19 Diagnosis?

Chinese social media is abuzz with a debate on whether Trump’s diagnosis should elicit sympathy or satisfaction.

Why Do Many Chinese Sympathize With Russia in the Ukraine Conflict?

Many Chinese believe that Russia faces a real security threat from the United States – and that China will face a similar threat in the future.

The widening perception gap between the Chinese and Western publics points to long-term divergence.

How Chinese People View the US Sanctions Against Huawei

The attack on Huawei has been hugely damaging for Chinese popular opinion toward the United States.

The risks of Central Asian migrant workers being pressured into joining Russia’s war effort have intensified in tandem with Moscow’s desperation.

Alongside rising tensions between their governments, ethnic Koreans living in Japan face daily discrimination and bullying.

Governments come and go, but Pakistan's economic woes – and its love/hate relationship with the IMF – remain constant.

Bullish talk about oil and gas at an industry conference has pushed back the country's energy transition plans.

By Chris Megerian and Kim Tong-Hyung

It was the third round of missile launches by North Korea this week, extending a record pace in weapons testing.

Every year, India’s Durga Puja festivities see a surge in demand for the fish from Bangladesh.