Does the Russia-Ukraine War Herald a New Era for Japan’s Security Policy?

Fears of a Marcos Government Courting China Are Overblown

Russia-Ukraine War: The Economic Impact for the Asia-Pacific

The Complexities of China’s Struggle For Justice

A New Russian Gas Pipeline Is a Bad Idea for Mongolia

Anti-coup demonstrators continue to pour onto the streets for a fifth straight day in Myanmar despite the protests turning violent on February 9, with one woman sustaining a critical head injury from a bullet in Naypyidaw.

A day earlier, the new military administration had issued warnings of a crackdown, banning gatherings at potential flashpoint sites across the country.

Senior General Min Aung Hlaing, the junta leader who deposed the elected government of Aung San Suu Kyi’s National League for Democracy (NLD) on February 1, made a televised speech on the evening of February 8. In his first address since the coup, televised on state-run MRTV,  Min Aung Hlaing justified seizing power by referring to  “voter fraud,” which the military claims tainted the 2020 general elections that handed the NLD a landslide victory.

A statement issued by the new military rulers, also read on MRTV on Monday, warned of “legal actions” against protesters and reiterated the military’s rhetoric of “discipline-flourishing democracy.” “Democracy can be destroyed if there is no discipline,” declared the statement, adding “We will have to take legal actions to prevent acts that are violating state stability, public safety and the rule of law.”

Notices were issued in several townships in Yangon and Mandalay, imposing a curfew from 8 p.m. until 5 a.m. and banning public gatherings of more than five people in a bid to prevent protest marches. Protesters could face prosecution under Section 144 of the Criminal Code for “unlawful assembly,” a legal tool that has been used in the past by the Myanmar junta to justify violent crackdowns on lawful mass demonstrations. 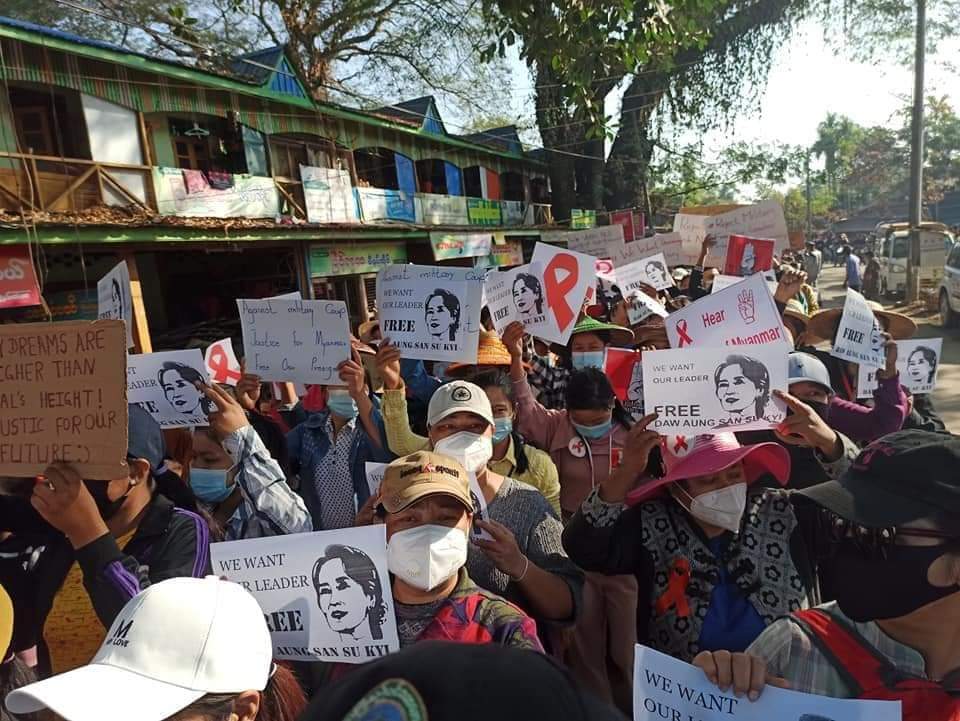 Notwithstanding the military’s warnings of a crackdown and increasing signs of a willingness to use greater force to suppress demonstrations, protests have spread across the country, including ethnic minority-dominated border townships in the Naga Self-Administered Zone in Sagaing Region and Chin State.

On the morning of February 10, tens of thousands of people gathered on the streets of Monywa, Kalaymyo, Katha, and Homalin in Sagaing Region with chants about boycotting the junta and reinstalling the elected government: “We want democracy”; “Give power back to the elected government”; “Set free Aung San Suu Kyi and the president.”

“It’s dangerous to protest against the generals. But we can’t go quiet. No one wants this military dictatorship. We have been held hostage by dictators for far too long,” said a 55-year-old protester in Monywa on February 10. 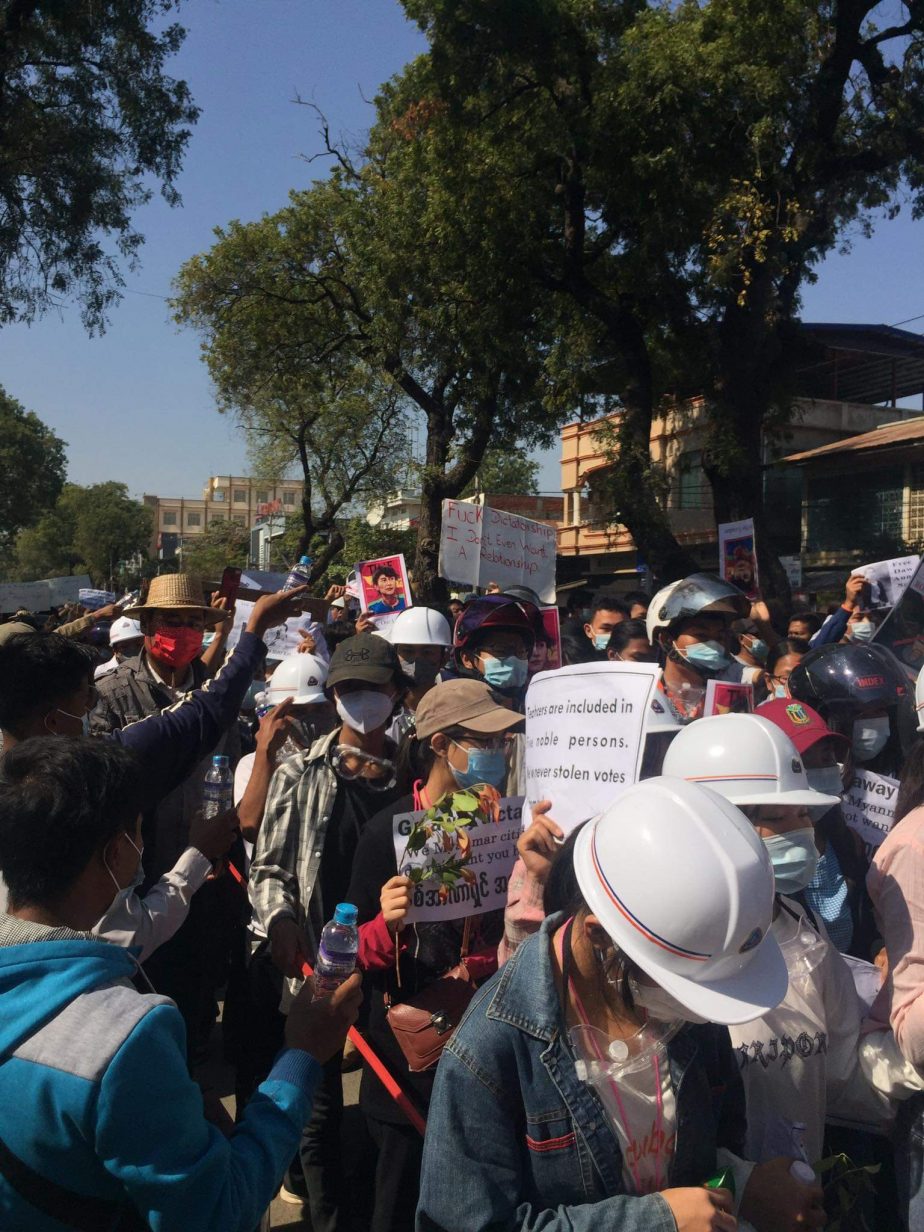 Scene from a protest march held on February 10 in Monywa city. Photo by Thet Swe Aye.

As Myanmar erupts in nationwide protests against the military takeover, a small refugee community in northeastern India is alarmed, worried, and sad. These ethnic Chins, who share an ethnic ancestry with the Mizos and Kukis in Northeast India, fled Myanmar between 1989 to 2004 when the Myanmar military violently cracked down on the Chin self-determination movement.

Lalnuntluanga Fanai, who fled Sagaing in 2004 and currently lives in Mizoram’s Aizawl, says: “We are concerned about our loved ones and relatives in Myanmar. With the military directly at the helm of affairs, they, as ethnic minorities, would be more vulnerable to oppressive treatment.”

Samuel Kuki, who splits his time between Homalin in Sagaing and Churachandpur in Manipur, thinks “the descent to military rule could worsen the Chin refugee situation, forcing more people to take refuge in northeastern India.”

Regional media on February 10 reported that the Chin National Army, the armed wing of the Chin National Front, an ethnic Chin group fighting for self-determination and a federal union in Myanmar, has sought asylum for their family members in Mizoram’s Champhai district bordering Myanmar as there is apprehension that with the situation escalating the junta may crack down on them at any time.

Following the coup, the international border crossing and trade route of Moreh that connects India with Myanmar and ASEAN came to a screeching halt.

“The trade was just starting to take off after coronavirus-related public health restrictions were lifted by Indian government. Then came the coup in Myanmar, as a shock. Everything’s in a lull once again, and we don’t know how long it will take to normalize the situation,” says T. Houpu, an Indian shopkeeper in Moreh.

Analysts caution that the coup in Myanmar could also bring in a fresh spell of uncertainty in politically volatile Northeast India. Multiple Indian insurgent groups share historical relationships with ethnic armed organizations in Myanmar, in addition to having their bases across the border in Myanmar. Now with the prospect of prolonged unrest in Myanmar following the military takeover — enmeshed in which are aspirations of the Bamar majority and the ethnic minorities of the country — the fresh ground of fluidity could bestow Indian insurgents operating in the region new opportunities for forming and shifting alliances. This, in turn, could impact the long-drawn ongoing negotiations between these groups and the Indian government.

Thet Swe Aye is a freelance writer based in Monywa in Sagaing Region of Myanmar. He is a regular contributor to Monywa Gazette.

Bikash Kumar Bhattacharya is an independent journalist based in northeastern India. His works have appeared in Mongabay, The Diplomat and The Indian Express among others.

What Comes Next in North Korea’s Battle With Omicron?

The Path to Militancy and Terrorism

The Pacific’s youth will shape the future of their Great Ocean States, understanding them is critical.

Can the US Deter a Taiwan Invasion?

There are concrete strategic reasons why New Delhi must do so, beyond obvious humanitarian ones.

After Myanmar’s Military Coup, Arakan Army Accelerates Implementation of the ‘Way of Rakhita’

Despite its support for the national protest movement, various factors have contributed to the armed group’s relative silence since the coup.

Central and State Governments in India Wrangle Over Refugees from Myanmar

New Delhi has refused to take steps that would antagonize the Tatmadaw following its February 1 putsch. Refugees fleeing Myanmar may well serve as a test for India.

The decline of the Rajapaksas has adversely hit Chinese fortunes in the Indian Ocean island and sullied its image among other Belt and Road partners.

The Economic Outlook for the Philippines Under Ferdinand Marcos Jr.

The new president will take the reins at a time of high inflation and monetary tightening in the global financial system.

Replicating Ukraine’s Territorial Defense Force is not legally or politically feasible in Taiwan – at least for now.

China’s graduate entrance exam offers hope – and few guarantees. But amid an uncertain future, more and more young Chinese are signing up.

Uneasy with both Russia’s invasion and Western sanctions, India is even more convinced that it must diversify its technology partnerships and develop more homegrown capabilities.

Uncertainty and cynicism loom over the Philippine economy amid Marcos’ win.

The story of the “Gwangju White Papers” and “Beyond Death,” the first underground handouts to discuss the Gwangju Uprising.

The return to power of the Marcos clan hints at deeper problems with the country's democracy.

Is Gwadar’s New Development Prepared to Handle Its Weather?

Gwadar often sees intense seasonal rains that can cause flooding. Recent CPEC-linked development in the rapidly growing city may be making that problem worse.