Does the Russia-Ukraine War Herald a New Era for Japan’s Security Policy?

Fears of a Marcos Government Courting China Are Overblown

Russia-Ukraine War: The Economic Impact for the Asia-Pacific

The Complexities of China’s Struggle For Justice

A New Russian Gas Pipeline Is a Bad Idea for Mongolia

Over the past 13 years, the Mae Tao Clinic has grown from a small house serving pro-democracy students escaping the 1988 crackdown to a busy clinic providing free healthcare for Myanmar migrant workers and people crossing the border from Myanmar into Thailand. This year, the junta’s violence generated renewed waves of thousands of displaced people.

The clinic’s physician, Dr. Cynthia Maung, was recently consulted by Linda Thomas-Greenfield, the U.S. ambassador to the U.N., about facilitating $50 million in emergency aid to Myanmar. Many point out that the aid might not be reaching everyone.

Working as an organizational development training coordinator, Myat Kaung supports the team at the Mae Tao Clinic on the Thai-Myanmar border. “It’s challenging to implement our activities in ethnic areas due to the military’s restrictions on transportation, high inflation rate and delays of the process,” said Myat Kaung. “The number of internally displaced persons (IDPs) is increasing day by day.”

In addition, as this is the rainy season now, the clinic is worried about malaria, diarrhea, and other diseases, he adds.

Importantly, self-help groups like the Mae Tao Clinic that were founded by regular Myanmar people risk criminal charges. In recent days, a Yangon resident, Khine Lwin, was arrested for providing free oxygen concentrators, all on the suspicion of being a member of the resistance movement.

“The pandemic restricts the way we work,” admitted Myat Kaung. “Also, communicating with people in Myanmar remains a challenge due to security reasons.”

Yet, his team is still trying its best to deliver aid in remote areas. “The IDPs were extremely happy although they needed to walk seven hours to get the food – they were running out of rations.”

According to the United Nations Office for the Coordination of Humanitarian Affairs (UNOCHA), about 3 million Myanmar people need humanitarian assistance and protection services across various parts of the country. Apart from the chaos and violence resulting from the February coup, the pandemic is ravaging the country – the total number of people infected with COVID-19 is over 376,000 and Myanmar is notching over 2,000 cases per day. That is believed to be a massive undercount, however.

Myanmar’s military has centralized all resources for providing medical aid, from vaccines to oxygen and medications. At the same time, medical workers have refused to work for the junta, forming the backbone of the Civil Disobedience Movement. 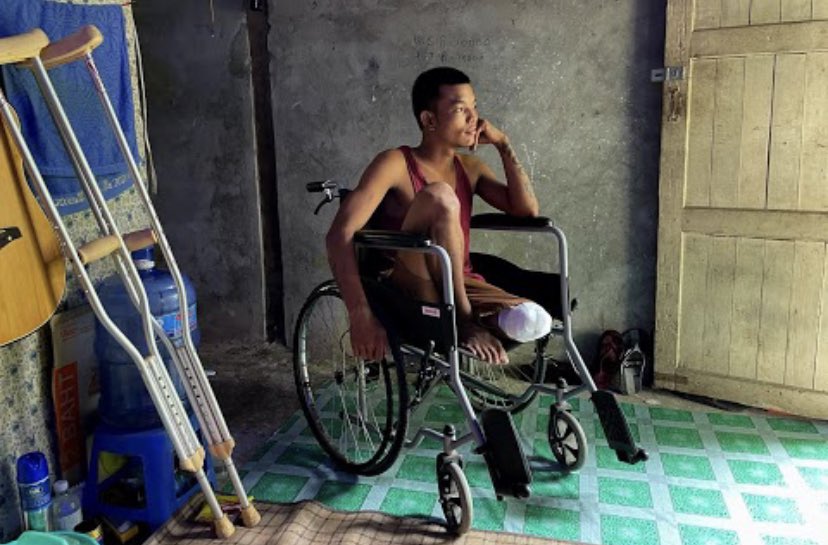 A victim of junta violence in an ethnic area. Photo by special arrangement.

Aid as a Weapon

Some argue that handing over supplies of medical aid to the junta equates to lending them legitimacy and delivering actual weapons, as Russia does.

By blocking aid to the neediest people, Myanmar’s generals have transformed humanitarian aid into a device for the continuation of war against its own citizens.

It is a modus operandi that Thailand, India, and China support by working closely with the junta administration, as well as a few ethnic armed organizations that reside on the China-Myanmar border and facilitate trade in different resources.

Long before the dramatic surge in COVID-19 cases, Myanmar’s protesters were calling for the U.N. to invoke the Responsibility to Protect (R2P) doctrine and institute a no-fly zone; however, there has been a lack of political will to enforce the ideas that justified U.N. intervention in other countries such as Libya and Syria. Some wanted to interpret the R2P merely as targeted sanctions, not military intervention, arguing that they would deal the junta a serious blow. Opponents claim, however, that the size of Myanmar’s shadow economy is so enormous that it can continue operating indefinitely by trading resources to its neighbors, mainly China.

In the past months, protesters have expressed gratitude for sanctions targeting Myanmar generals. By the same token, they have opposed ASEAN leading talks with the junta on the grounds that it gives the generals legitimacy. That is why it has disheartened many protesters and human rights activists that the United States and EU are calling on the regional organization, the member states of which have been conducting business with the junta, to play a bigger role in Myanmar.

Is America Really Back?

The lack of actions from USAID’s Samantha Power, in whom some put big hopes, is also striking. The Pulitzer Prize winner once scathingly said that “American leaders did not act because they did not want to” when faced with mass atrocities happening in the past. Now Power too is choosing not to interfere in Myanmar, despite her experience gained when serving under Obama administration.

Myanmar poses a perfect opportunity for United States to prove that its influence is not diminishing, yet the very fact that U.S. journalist Danny Fenster has been behind the bars of a Myanmar prison since May 4 shows that the U.S. has run out of options to influence the regime by diplomatic measures.

Besides the crisis posed by the coup, the long-standing Rohingya problem remains unresolved. Hundreds of thousands of Rohingya remain confined within the gates of their camps, and are being denied COVID-19 vaccines by the junta.

Against this backdrop, the seemingly unstoppable pandemic with its new variants is not an issue that can be swept under the carpet of regional integration. Myanmar’s situation should not be considered a domestic issue; the public health crisis will spill over to affect the entire region. 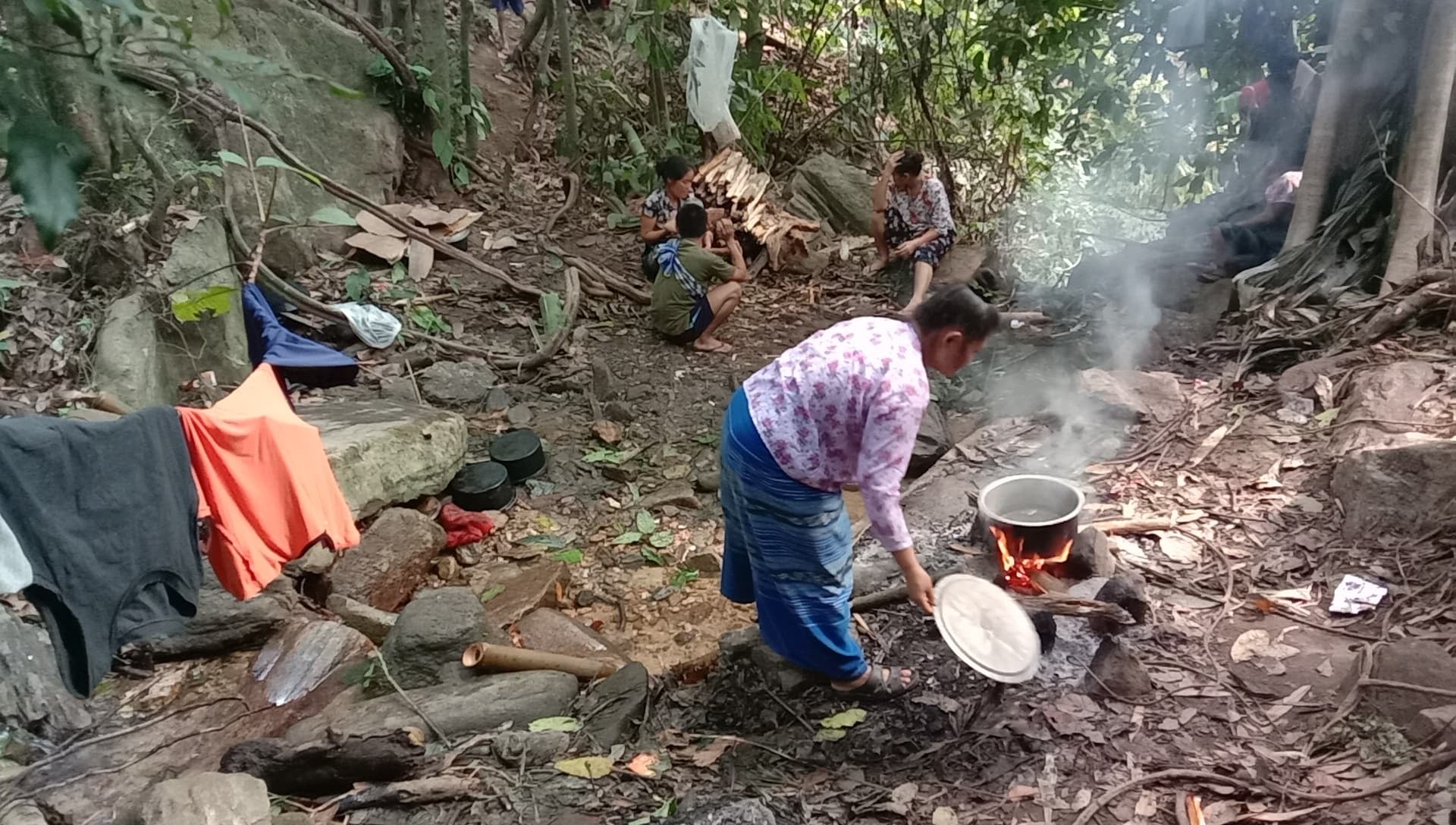 Yanghee Lee, the U.N. Special Rapporteur on the situation of human rights in Myanmar, has said that the junta will not be able to refuse the U.N. mandate for international medical professionals and health workers to enter Myanmar. That could also prompt Myanmar medical professionals now in hiding to come out and join hands with the U.N. to deliver services, she argued.

She envisions the intervention as a cooperative effort between all U.N. agencies led by U.N. Secretary General Antonio Guterres, and local health workers.

In this scenario, Lee must hope that ceasefire would last and that humanitarian workers will be neither obstructed nor targeted.

Given the fact that the Myanmar junta currently blames every deadly attack on civilians on the People Defense Forces (PDF), which they have labelled as “terrorists,” we can easily imagine the perils of such engagement.

Because the members of the PDF and other resistance groups recruit from a broad civilian population, humanitarian workers might be accused of aiding criminals and fueling the conflict. Also, casualties on the side of humanitarian workers cannot be excluded given further escalation. In any case, even foreign humanitarian agencies can enter specific areas only if permitted.

The engagement of foreign aid workers directly on the ground in Myanmar would create a peculiar situation: the junta, with their own medical equipment on one side, and the foreign agencies, serving those denied the junta’s services on the other. It’s a scenario that could not be tolerated for a long time. Alternatively, the junta might agree to allow international aid workers only in major urban centers where their activities can be monitored, and coronavirus transmissions are the highest.

Some argue that, amid the efforts to curb the pandemic globally, the weaponization of medical assets in Myanmar may leave U.N. agencies, NGOs, and other international donors with no other choice than to engage with the National Unity Government (NUG) and civil society organizations.

In that way, the aid would not necessarily reach the most Myanmar people, but it would give credibility to a body that has broad public support and add international recognition to the NUG, something that pro-democracy protesters have been calling for.

What Comes Next in North Korea’s Battle With Omicron?

The Path to Militancy and Terrorism

The Pacific’s youth will shape the future of their Great Ocean States, understanding them is critical.

Can the US Deter a Taiwan Invasion?

Despite dwindling funds and constant fear of arrest, most members of the CDM remain adamant that they won't return to work until democracy is restored.

Millions of dollars in pandemic relief funding from the IMF have gone missing under the military regime, even while Myanmar battles a surge of COVID-19 cases.

How the Milk Tea Alliance Is Remaking Myanmar

By Jasmine Chia and Scott Singer

Why the social media-based movement, and not ASEAN, offers a vision for a democratic and federalist Myanmar.

The Danger of Defending the Defenseless in Myanmar

Lawyers that offer to represent protesters detained by the junta are themselves facing abduction and arrest.

The decline of the Rajapaksas has adversely hit Chinese fortunes in the Indian Ocean island and sullied its image among other Belt and Road partners.

The Economic Outlook for the Philippines Under Ferdinand Marcos Jr.

The new president will take the reins at a time of high inflation and monetary tightening in the global financial system.

Replicating Ukraine’s Territorial Defense Force is not legally or politically feasible in Taiwan – at least for now.

China’s graduate entrance exam offers hope – and few guarantees. But amid an uncertain future, more and more young Chinese are signing up.

Uneasy with both Russia’s invasion and Western sanctions, India is even more convinced that it must diversify its technology partnerships and develop more homegrown capabilities.

Uncertainty and cynicism loom over the Philippine economy amid Marcos’ win.

The story of the “Gwangju White Papers” and “Beyond Death,” the first underground handouts to discuss the Gwangju Uprising.

The return to power of the Marcos clan hints at deeper problems with the country's democracy.

Is Gwadar’s New Development Prepared to Handle Its Weather?

Gwadar often sees intense seasonal rains that can cause flooding. Recent CPEC-linked development in the rapidly growing city may be making that problem worse.