In the bustling Prague 7 district, an art exhibition takes place featuring work on the life and pro-democracy struggle of local activists and youth in Hong Kong. A white sculpture in the main hall, with goggles, umbrella, and a gas mask, catches the eye first. The attire, blended in white clay with the rest of the statue, is symbolic and was once donned by thousands of pro-democracy activists in Hong Kong when the city was seeing waves of intense protests in 2019 and early 2020 – mainly in opposition to the then proposed extradition law and the greater curbs and restrictions introduced by mainland China, which were aimed at curtailing Hong Kong’s autonomy and its special status. The protests turned violent with excessive use of force from the police and resulted in numerous detentions.

Next in line are a couple of canvas portraits, souvenirs, and art pieces talking about rights violations and freedom in the city. This is followed by a naked sculpture of the Chinese president on a traditional dragon-tipped boat that is filled with blood instead of water. CCTV cameras are fitted into the piece of art – depicting the greater surveillance of Hong Kong and the rest of China – while a placard just on the edge reads “naked evil taking off!”

For Loretta Lau, a Hong Kong-origin teacher and activist currently based in Prague, these art installations and exhibitions at her NGO DEI – meaning “us” in Cantonese and the abbreviation literally standing for diversity, equality, and inclusion – are one way of keeping her real Hong Kong alive, forming a mini global community, and, most importantly, educating people about where she comes from and what goes on there. Finding Hong Kongers in Czechia is a rarity; according to Lau, there are just a handful of them in the country. The work she does and promotes is, therefore, so far the most instrumental representation of Hong Kong and from Hong Kongers here.

“I came here for my Master’s degree for two years and had promised my family to go back to Hong Kong but [our] world was changing crazily,” Lau says, on pursuing arts and then doing performances and political art and eventually becoming an activist amidst instability back home. She then founded a community space with a Czech partner, Jakub Zajicek, in the heart of Prague to hold meaningful panel discussions, exhibitions, and other events catering to different communities and to voice support for Hong Kong activists and people who had been intimidated and silenced back home. Currently, her NGO has suspended routine operations temporarily due to a lack of funding.

“I started to think about gathering Hong Kongers from Central Europe and… very luckily, got a place to hold these kinds of events. Our goal is to integrate and be open to all communities,” she adds.

Lau says she feels a certain connection with the Ukrainians, as the struggles of both these communities, though in different magnitudes, deal with standing up for their rights despite being in a powerless situation; Ukrainians having their land invaded and Hong Kongers being controlled by an oppressive, totalitarian regime in violation of their unique status and constitution. 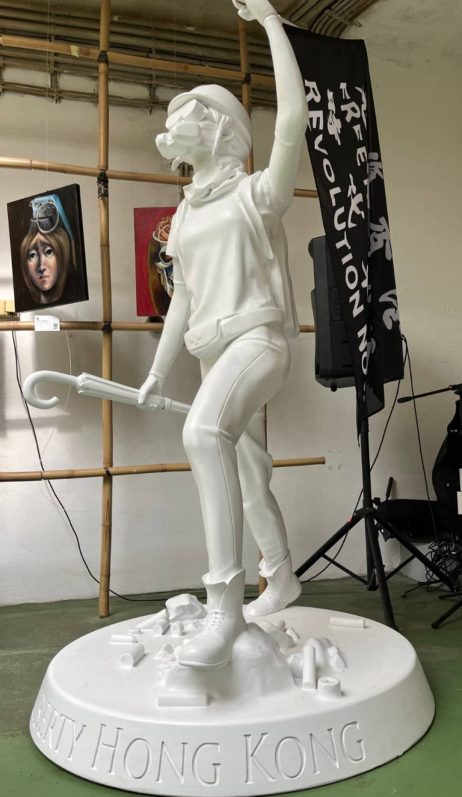 A sculpture at NGO DEI’s art exhibit in Prague, Czechia.

She further shares that people in Ukraine really spoke about the Hong Kong situation in 2014 during the Umbrella movement and 2019.

Simon Cheng, a pro-democracy activist and founder of Hongkongers in Britain (HKB) – an association based in Britain founded to unite expatriates from Hong Kong – shares similar sentiments.

“Hong Kongers and Ukrainians share the same destiny in our common struggle to defend the frontline of democracy and freedom in Asia and Europe respectively. To this end, many make grave sacrifices and lose their homeland. Through this crisis, we shall unite as global citizens for a basic value of humanity and mercy,” says Cheng.

HKB, according to Cheng, advocates a life-boat scheme for the Ukrainians in the United Kingdom, through which the Hong Kong people join the British government’s campaign to host Ukrainian refugees.

“We hold several joint rallies with Ukraine diaspora groups for our common cause in the U.K., even our Hong Kong Prague-based artist group, NGO Dei, received many asylum seekers from Ukraine for emergency accommodation at their gallery,” he adds.

“Showing the World What I Saw”

Roland Au, 33, is a theater artist from Hong Kong and has been using his art to spread a message of peace, equity, and freedom in Europe. He says his homeland has changed a lot in the past few years and his work, more or less, speaks about the situation there.

“I always question myself about what art can do for a movement, especially when it’s changing so fast. I do performing arts and try to show moments related to the Hong Kong movement,” he shares, adding that in his work, he tries to embrace their fading language as well as other aspects of the Hong Kong culture.

“We create shows for people here [in the West] to inform and educate them about the situation in Hong Kong. We use the creative space to write stuff related to democracy and freedom. The work is thought-provoking and on the lines of not taking democracy for granted,” he maintains.

One of Au’s prominent works is “The Protester,” a cardboard sculpture made to mark the two year anniversary of the 2 million people march in Hong Kong. The situation is drastically different now compared to 2019, Au explains, as anti-government protests are banned and chanting slogans is a crime.

“Posting posters is a crime. Wearing black is a crime. No more freedom and no more rights! Never forget and never give up! Wherever we are, our soul and spirit are together. Liberate Hong Kong. Revolution of our times,” read a caption under one of his artworks. “Liberate Hong Kong, Revolution of our times” is a slogan that was widely used by protesters back in 2019; under Hong Kong’s National Security Law, passed in 2020, the phrase is now outlawed under penalty of jail time.

Au says, through art, he is just opening the door for the audience and trying to show them what he witnessed in Hong Kong – intimidation and threats to freedom and free speech.

The pandemic and imposition of the National Security Law thwarted the movement. Many activists have since fled the city or have been arrested and are facing legal repercussions. Those deemed critical of the government are subjected to arbitrary detentions and trials, and over 10,000 people have been apprehended on protest-related charges. The crackdown categorically rejects the “One Country, Two Systems” principle, promised to Hong Kong by the Sino-British Joint Declaration which guarantees basic freedoms and civil liberties in the city.

Twenty-eight-year-old Ingrid, who didn’t share her surname, came from Hong Kong to Prague for educational purposes and currently supports humanitarian and cultural work with Lau. She did a Master’s in Arts and is a sculpture artist.

“I do the exhibitions and look after the cafe… after my graduation in 2020 I couldn’t go back to Hong Kong despite wanting to,” she shares, with a pang of guilt about being far from home. But Ingrid’s work keeps her going.

“Loretta, Jakub (the Czech partner), and I came up with this idea of opening a center to gather people here to promote different cultures and create a whole community. We welcome everyone,” she states, adding that the exhibitions related to Hong Kong have surely sparked interest among the community members. She meets hundreds of people who want to know the truth and more about her homeland and culture.

Moreover, Lau underscores that she definitely considers herself and her people as “Hong Kongers” given their unique identity and history. One of the goals of her community space has been to show Hong Kong from their perspective.

“The British government had Hong Kong for over 150 years and then it was handed over to Communist China in a blow to our sovereignty. Different people have different views on the identity issue, but after the 2019 movement, a lot of us locals started to see the difference between Hong Kongers and mainland Chinese people, clearly. We speak a different language, first of all, and want more sovereignty,” she concludes.

The BNO scheme, which took effect this week, is attracting Hong Kongers who no longer feel safe in their home city.

The sentencings of Joshua Wong, Agnes Chow, and Ivan Lam confirmed the fears of young Hong Kongers amid a growing number of arrests.

Hong Kong’s legal prosecution of opposition figures puts it in the company of authoritarian regimes worldwide.